What Is A Phytochemical? Eating a plant-based diet is a concept that’s been trending for a few years now. Plants and whole foods have been gaining momentum as celebrities promote a dietary philosophy that says “Green is God.” Mainstream media is now catching on to what ancient, indigenous cultures have known for eons: plants make up an important part of a healthy healthy diet. The catchall term for the active chemicals that make up all plants across the entire plant kingdom is “phytochemicals.” What makes phytochemicals particularly unique is that they interact with our DNA in a way that can turn on and off gene expression. In this eye-opening new video from IPEtv, Marc David, Founder of the Institute for the Psychology of Eating, divulges the new science that supports how ingesting plants can literally change the course of your health. You are no longer a slave to your genetic makeup. Plants are here to help you take your power back and create a sustainable, healthy future. 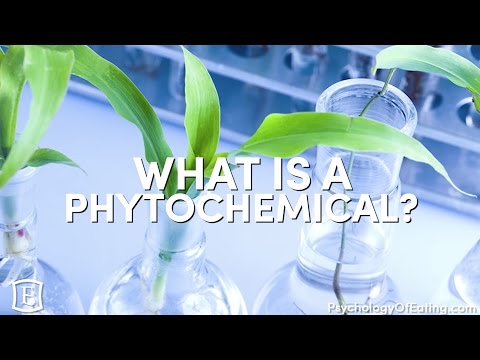 Greetings, friends. I’m Marc David, founder of the Institute for the Psychology of Eating. Today’s topic: what is a phytochemical?

Now, phytochemicals, that’s a big word these days in the nutritional field. Maybe you’ve heard of the term. Maybe not. But if not, it’s worth knowing about. And if you have heard it, I want to demystify the term phytochemical, figure out what it truly means, and see why we are at the dawn of a new understanding of the healing power of herbs and plants.

Now, what’s happening these days is there’s an explosion of scientific research in the healing power of plants.

Now, in a weird way this is nothing new because so many traditional cultures for eons of times, whether it’s from traditional Chinese medicine, Ayurveda, the ancient traditions of Europe, so many Shamanic and traditional cultures, they understood the power of plants. Now science is starting to prove it.

So science has identified perhaps several thousand phytochemicals. And there may be tens of thousands more. Nobody truly knows the exact number. So when it comes to phytochemicals, you’re going to hear names like ginsenosides in ginseng, silymarin in milk thistle, curcuminoids in turmeric, allicin in garlic, ginger oil in ginger. The list goes on.

By the way, chlorophyll is a phytochemical, probably the most important one in human history. So, again, it’s a catchall term for any possible chemical that one can identify in a plant. Now, here’s the catch.

Plants have evolved alongside humans over eons of time.

And there’s no doubt that they are a treasure trove of healing agents for a vast number of symptoms and diseases that impact us.

There’s an ancient Native American tale that said at one point humans were starting to get a little bit mean to the creatures and the animals. So the animals all got together and they decided, “We’re going to bring disease to humans.” And then the great Spirit looked at all the humans starting to suffer and said, “Wow, we’ve got to do these guys a favor,” and spoke to the plants. And the plants said, “We’re going to produce healing medicines.” So I find that interesting.

So these days, by the way, about 40% of all prescription drugs are plant derived or plant based. That’s where we got the original idea for the molecule. And in earlier days of the pharmaceutical industry, that percentage was even higher.

Now, what we’re discovering is that the phytochemicals, plant chemicals have an extremely unusual impact on our DNA.

They can literally signal your DNA to turn on or off the expression of various genes. Just because you have a gene, let’s say, for alcoholism or for diabetes or for heart disease or for obesity, it doesn’t mean that you’re going to get those conditions. It’s a switch literally that gets turned on and off. And environmental factors help determine if those genes will express.

And here’s the thing. They can have an immediate impact on gene expression. I’m talking about in less than minutes. So chances are you were raised in junior high school to mean genetics means I have brown eyes. And that’s what I’m born with. And I’m a male. And that’s why am. And genetics is forever. Okay, yeah, your brown eyes are forever. Male, female, that’s forever. But gene expression moment to moment is constantly being turned on and off.

So we’re living in a time when science is beginning to prove what smart human beings in traditional cultures have known since recorded history, that plants truly do heal. And they do so at the most fundamental level of our genetics and our humanity.

How beautiful is that that you can walk outside and the plants are medicine? And the plants talk to your DNA the moment you put them into your body. And they can have a direct impact that can help you be an empowered, healthy, pleasured, alert, and alive human being.

My friends, that is the magic of life.