In the last few years, more and more people who struggle with binge eating have begun to speak publicly about their challenges. This is a great thing, because it’s helped many people to overcome the feelings of shame and isolation that so often accompany bingeing. The movement toward more openness and honesty has also had an interesting side effect: it’s prompted the medical community to talk about binge eating disorder as a diagnosable condition, which then opened the door for drug companies to create prescription drugs intended to medicate binge eating away. But as Marc David suggests in this thought-provoking new video from IPE, the solutions offered by the pharmaceutical industry may not be so good for us – and they might even take us farther away from our path of true healing. If you’ve ever dealt with binge eating or you simply want to learn more, please tune in – you’ll come away with some practical information about what binge eating is, in addition to some helpful ideas for working with this eating challenge in a surprising new way. 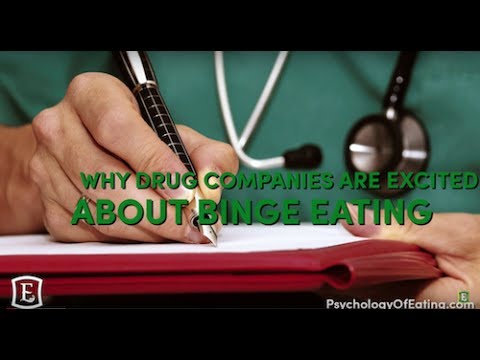 Greetings, friends. I’m Marc David, founder of the Institute for the Psychology of Eating. Let’s talk about why the big drug companies are excited about binge eating.

First, let me give you some background.

Binge eating is becoming more and more of a problem these days.

It’s coming into focus. It’s considered one of the common eating disorders in the United States, affecting approximately 3.5% of women, 2% of men, 1.6% of adolescents. Quite frankly, I think it might be a little higher.

More to the point, they’re defining it as a sense of lack of control over eating during that episode, feeling like you can’t stop, feeling like something is taking over. Okay, we can all relate to that. So it is characterized by eating much more rapidly than normal, eating until feeling uncomfortably full, eating large amounts of food when not feeling physically hungry, eating alone because of feeling embarrassed, feeling disgusted with yourself, and depressed and guilty afterwards.

And you don’t necessarily want people to heal because if the drug actually healed you, you’d only need it once. And it’s done. You’re not hooked. There’s no income source.

Now, here’s the thing. What I’m trying to say is once the medical profession classifies something as a disease or a disorder, the big money comes into play. And you’ve got to follow the money if you want to understand how this world works.

Now, here we have a drug that’s here to help people. But check it out. It’s got a long list of side effects that are going to end up pushing us even deeper into the medical model. So if you have binge eating disorder, here’s what I want to tell you: you do not have a deficiency in lisdexamfetamine dimesylate. That’s not what your binge eating disorder is.

So instead of calling it a disorder… Because that pathologizes us. It limits us when we call it a disorder. And it keeps us trapped in the powerful subtleties of language that can disempower us. And that’s how they’re controlling your mind.

So let’s call binge eating a beautiful challenge or concern. Yeah, it’s a challenge, for sure. So your binge eating is a brilliant, wise teacher. It’s pointing to places in your life that need attention, where we need to learn. Maybe it’s a relationship, a work issue, deeper concerns around, “Who am I? Why am I here? What’s my life for? How come I can’t be happy?” These are questions that go to the root of who we are.

So rather than medicalize your challenge, we rise to the occasion and meet it. We listen to it.

We see where it’s pointing to. Unwanted behaviors, such as binge eating, they’re like angels that are giving us a message. They’re whispering something important in your ear. Don’t medicate it away.
Because it’s not going to work, anyway. It’s going to get you hooked. It’s going to keep you locked into a system that doesn’t really provide true healing.
Again, once you hear the crucial messages that binge eating is here to teach us, then we can start to take those messages, take those lessons, and use it to fuel our growth.

And that’s how we become more empowered in this world. That’s how you meet your destiny. Not by taking a prescription drug, but by going inside and saying, “Who do I have to be? What’s the work I need to do on self to find out who I really am and what my best expression is in this world?” And when you embrace your eating challenges in such a way, you find out who you really are. And you get there.

And that, my friends, is the magic of the world.