Skip to content
Home » Strange Things That Make Us Gain Weight: The Rebel Inside You

Strange Things That Make Us Gain Weight: The Rebel Inside You Many people who are trying to lose weight focus on making changes in their diet and exercise routine, and believe they have covered all the bases. After a while, though, they may hit a plateau where they just can’t seem to lose any more. At this point, they’re likely to feel frustrated and confused – they’ve been following the plan carefully, so why isn’t the weight coming off? As it turns out, the old approach that’s based purely on “calories in, calories out” is only part of the story of why we gain weight in the first place, and how we can let it go. In this energizing new video from IPEtv, Marc David, Founder of the Institute for the Psychology of Eating, explains that we each have many different personalities within us, and surprisingly, each of our personas can have different metabolic needs. Tune in and learn how to tell who’s sitting at the head of the table when you eat, and how you can get all of your inner voices on board when it comes to weight loss. 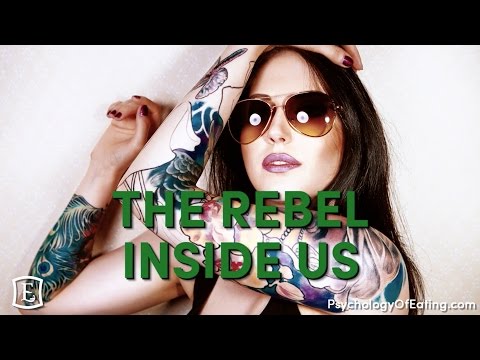 Greetings, friends. I’m Marc David, founder of the Institute for the Psychology of Eating. Let’s talk about strange things that can make us gain weight: the rebel inside us.

Okay, so let’s get down to business. You know this. We live in a world where weight is a concern for a lot of people. And few people realize that weight is such a deliciously complex topic. It’s not simple calories in, calories out. If it were, nobody would have a weight issue.

More importantly, far too many people have been shamed by the world for what they weigh or how they look. So we’re approaching this topic, not from a perspective of making anybody wrong for what they weigh. But let’s just take an honest look from a nonjudgmental place and see some of the hidden complexity that can cause unnecessary weight gain.

One of those for sure is the rebel within us. What does that mean? You kind of know what the rebel is. So here’s the deal. And psychologists behind the scenes, they love this one. You are not really just one person – me.

Many psychologists see the human psyche as a multiplicity of people inside us.

You’re not one person. You’re a crowd, meaning we have so many personalities.

So whenever any one of us eats, one particular personality will be present in that moment. One of our personalities will be sitting at the head of our dinner table, meaning you could be sitting down and eating a meal. And maybe it’s your inner adult that’s present, the one that makes good decisions, knows what to do. It could be your inner teenager who is like, “Hey, I’m going to eat whatever I want. I’m going to live forever.”

It could be the scientist in you: “Oh, I need to eat this amount of protein, fat, and carbohydrates. And am I getting enough nutrition?” It could be the health-conscious hippie in you who just wants to have sprouts and have a really cool smoothie with all kinds of crazy ingredients.

And oftentimes for a lot of people—not all—the persona inside of us that’s sitting at the head of the table when we eat is the rebel.

And the rebel inside us—you probably know this—loves to break the rules. The rebel loves to go against the grain, to be original and free and to do what ever the rebel wants to do because the rebel just loves to break every rule.

Now, here’s the deal: the rebel isn’t bad. It’s a good thing. You need your rebel. All these archetypes, all these personas inside of us, they have a reason. They have an upside. They have a downside. So you’ve got to be aware of it. So on the good side, the rebel is the part of us that goes against dumb rules. The rebel is the part of us that breaks free of shackles and chains that shouldn’t be on us, the old crusty stuff.

And here’s the deal: you want to embrace your rebel. You want to say to your rebel, “Okay, I want to put you to work.” You want to get the rebel on your side, working for you, not against you. So do yourself a favor. Look at what you need to be rebelling against in life that is indeed worth standing up to and rebelling against.

Rebel against any place that you see the world harming others where that shouldn’t be happening.

But when it comes to food, ask your rebel to take a deep breath and relax because you want the rebel to serve you in the places where it needs to show up. So when you’re sitting down at the table, invoke your inner king, your inner queen, the person inside you that has dignity. And choose foods that serve you that are vibrant for you.

That’s what you want to do, because when you invoke the personality within you that deserves to be sitting at the head of the table and when you tell your rebel, “Hey, I’m going to pull you out of my pocket when I need you best, when you can best serve me and serve the world,” our appetite starts to come into alignment. Our soul, our psyche, things start to come into true balance. And from there we have the best chance of reaching our natural weight and our natural metabolism.

And that, my friends, is indeed the magic of the world.