Gluten is one of the hottest topics in the nutrition world today, and one of the most controversial. It sometimes seems like each of the experts is saying something different, and to top it all off, they’re using terms that sound similar but aren’t quite the same. Some people talk about gluten allergies or sensitivities that affect some people but not others, while others claim that gluten is toxic and no one should consume it at all. Why has a simple protein such as wheat gluten become the center of attention in recent years, and what does all this mean for you? In this fascinating new video from IPEtv, Marc David lays it all out in clear, straightforward terms. If you’ve ever wondered what exactly gluten is, why it’s supposed to be bad, and how to determine if you should be reducing your intake of this common ingredient, you won’t want to miss this video. You’ll come away with a solid understanding of the different forms of gluten sensitivity and some practical strategies for deciding how large a role gluten should play in your diet. 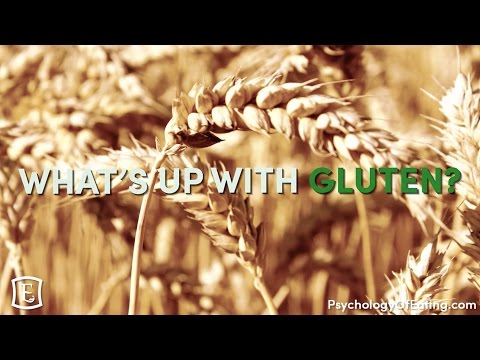 Greetings, friends. I’m Marc David, founder of the Institute for the Psychology of Eating. Let’s talk about what’s up with gluten.

Now, I’m going to share with you what I think you need to know in a handful of minutes or less what you need to know about this gluten business because people are hearing gluten allergy, gluten sensitivity, gluten is bad for you. And there’s a lot of controversy in science and medicine and on the airwaves right now about what to do about gluten.

So let me lay it out for you. And I’m going to try to really hit the target here.

So gluten is the protein component of wheat and several other grains.

So if you’re eating bread, pasta, cookies, cakes, muffins, all that sort of thing, you’re getting gluten. It’s the protein component of the wheat.

Now, this is a fascinating kind of study because when you look at human history, things like wheat are roughly about 16,000 years old. So when we go back into the historic record, like when did we first have wheat in the diet, it was 16,000 years ago. That seems like a long time. But it’s a blink of an eye in the development of human history, in the development of the human body.

Okay, so eating wheat is kind of like a genetic experiment that’s about 16,000 years old. Now, when someone is allergic to a food, when you hear, “You have a food allergy,” what science is saying is that you are reacting to the protein component of that food. And food allergies are a well-proven, undisputed phenomenon. We know they exist.

Now, for decades, scientists, clinicians have considered gluten one of the most common allergenic substances, especially for children. So literally when allergy experts… And this is since the 1940s, started talking about food allergies, they identified gluten a long time ago.

Here’s what you need to know. Food allergies are not an on-or-off, you either have it or you don’t. They can exist on a spectrum. So it’s not an all or nothing experience, meaning you can have an extreme reaction to something like gluten. And the most extreme is called celiac disease where the body cannot even handle it and it goes into absolute breakdown.

Or you can have moderate or mild reactions to a substance. This is what life is like. Some of us react to the sun. Some of us can soak tons of it in. So we all have sensitivities to things that exist on a spectrum.

So if you are allergic or sensitive to gluten, it can mimic just about any symptom you can imagine.

This is what is blowing the minds of scientists and clinicians. So gluten sensitivity and gluten allergies can mimic joint pain. It can give you joint pain, digestive upset, brain fog, depression. It will cause these things for some people. Depression, asthma, low energy, low sex drive, attention deficit, thyroid issues, autoimmune disease, believe it or not, dental issues, weight gain, headaches, skin problems, a ton of hormonal imbalances. And that’s just scratching the surface of the list.

Now, some of the leading edge researchers in the field will tell you that they believe that approximately 40% of the population is on some part of the gluten sensitivity continuum. Now, this is bizarre because what they’re saying is 40% of humans are reacting to pizza, to bagels, to bread, to pasta, to cookies. And this is kind of what we eat. This is what we’ve been feeding our kids for just about forever. So, oh my goodness, what do you do? It’s like, “I’m not gluten sensitive. I’m not going do anything about that.”

So here’s what I want to tell you. The best way to know – and you can get tested for this, but you have to get the right kind of test – but the best way to know, the gold standard to determine if you’re gluten sensitive in any way, shape, or for them is to eliminate it from your diet for several weeks. Take two weeks. Eliminate as much gluten as you can. And then see how you feel.

Did you have any symptoms that went away? Do you have more energy? Do you have less pain? Is your brain less foggy? How do you feel in the morning? Is your sleep better? Did you notice yourself losing weight? Did your digestion improve? These are some of the common things that people notice sometimes within days. Then after those two weeks, you introduce gluten back into your diet. And then you see if those symptoms come back.

Experiment on your own body and see what happens.

That’s where the rubber meets the road. That’s the gold standard to determine does this work, does this not work in my body?

I want to tell you after three decades in this field, I can say that this is one of the more powerful nutritional experiments you could do with one of the biggest nutritional upsides, one of the biggest health upsides possible. I’ve just noticed this. And, trust me, I was raised on bread, pasta, cookies, pizza, bagels. I didn’t want to know that I was gluten sensitive. And I eliminated it from my diet and changed my life.

Does that mean you can never eat it again? No. You find the place where it works for you, where it doesn’t work for you. You figure it out. It’s a journey. It’s a process. But think about it. Isn’t it amazing that you can change your diet and experiment in that way and your body changes in symptoms go away?

Because, my friends, this is not about you or me trying to limit you or me or anyone else. I’m not trying to tell you, “Oh, don’t eat that. It’s bad for you.” Get that out of your mind. What I want you to hear is how can we as human beings be the most amazing metabolic creatures possible? How can I reach my evolutionary potential such that when I wake up in the morning, I have energy? Such that I’m not overloading myself with symptoms that I don’t need? How can I take my own DNA and work with it so it can be the best possible force of nature that it can? That’s what we’re talking about here. It’s maximizing the potential of you, of your body.

And that, my friends, is the magic of life.